Louis is a British painter, sculptor, illustrator and street artist perhaps best known for his murals of endangered animals, in particular, bees. 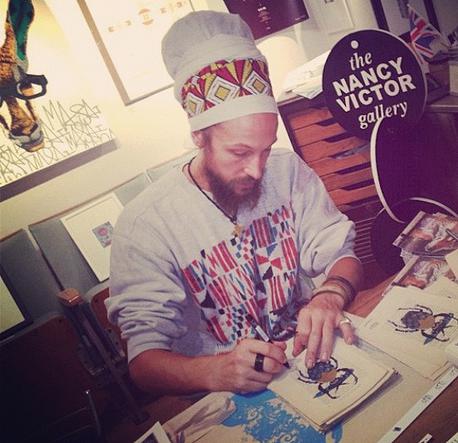 A graduate of Falmouth School of Art, he strives to find a human reference to animals juxtaposing an element that might not be previously obvious. An artist at heart, Louis is increasingly seen as an activist, a term he uses with some reluctance whilst acknowledging the power of visual language and social media.

His recent solo show, ‘Batteries not included’ at the Lollipop Gallery in London was his most ambitious show to date, encompassing an array of media in an effort to create an immersive experience and thus  stimulate engagement. It highlighted the breadth of his practice by including paintings, prints, fabrics, furniture, sound installations, ceramics, and film.

Louis Masai wants to provoke too and use his art as an agent for change and ecological awareness. He is an artist first and foremost but his strong beliefs inform his practice at every turn. It is easier to fail both as an activist and an artist than it is to succeed. Masai is smart enough to know that and brave enough to carry on regardless.

His street practice should be understood as a dialogue and complementary to his gallery work. He paints on the streets because that is the most impactful place for his message.

Masai understands that the ecological issue facing mankind is possibly the greatest threat we have ever faced and one, which this generation has a duty to address.

For the most part it would seem humans have forgotten how to interact with nature, and have become consumed by greed and theft of the natural world. It would be lovely to see humans reminded more often that we sit alongside nature and not above it.

At the moment my focus is on raising awareness for endangered species and generally living a natural life, encouraging others to join in. I honestly don’t think that as human beings we can change. I think technology has no room for the nature it relies upon, it but it doesn’t seem to have acknowledged the finite side of it. Governing bodies only seem to care about economical growth and technological development, whilst that is at the forefront of how we operate I don’t see how things can change. What I do foresee is improvement however, and that comes through increased awareness and education. The youth really are our future.

My hope for the future is balance. It’s optimistic but I hope for balance and fairness amongst people, animals and the environment too.