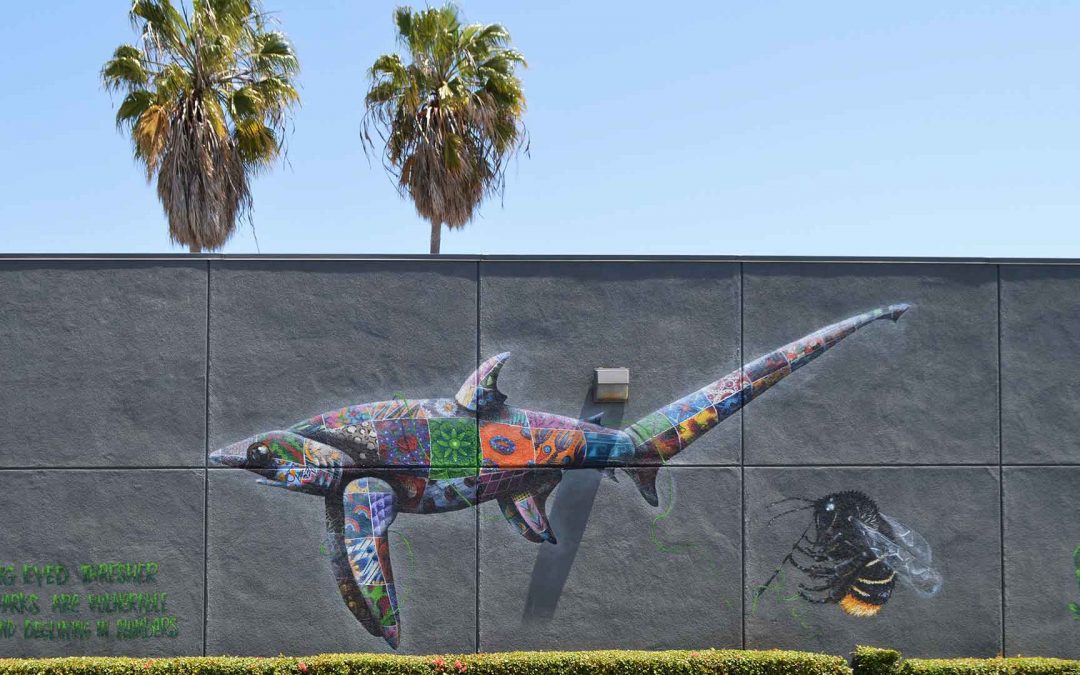 The excitement of ‘getting up’ around the world doing exactly what I love most, is a privilege that I am recently enjoying on a more regular basis. I’ve just returned to London after a three week painting trip in the states; I painted… 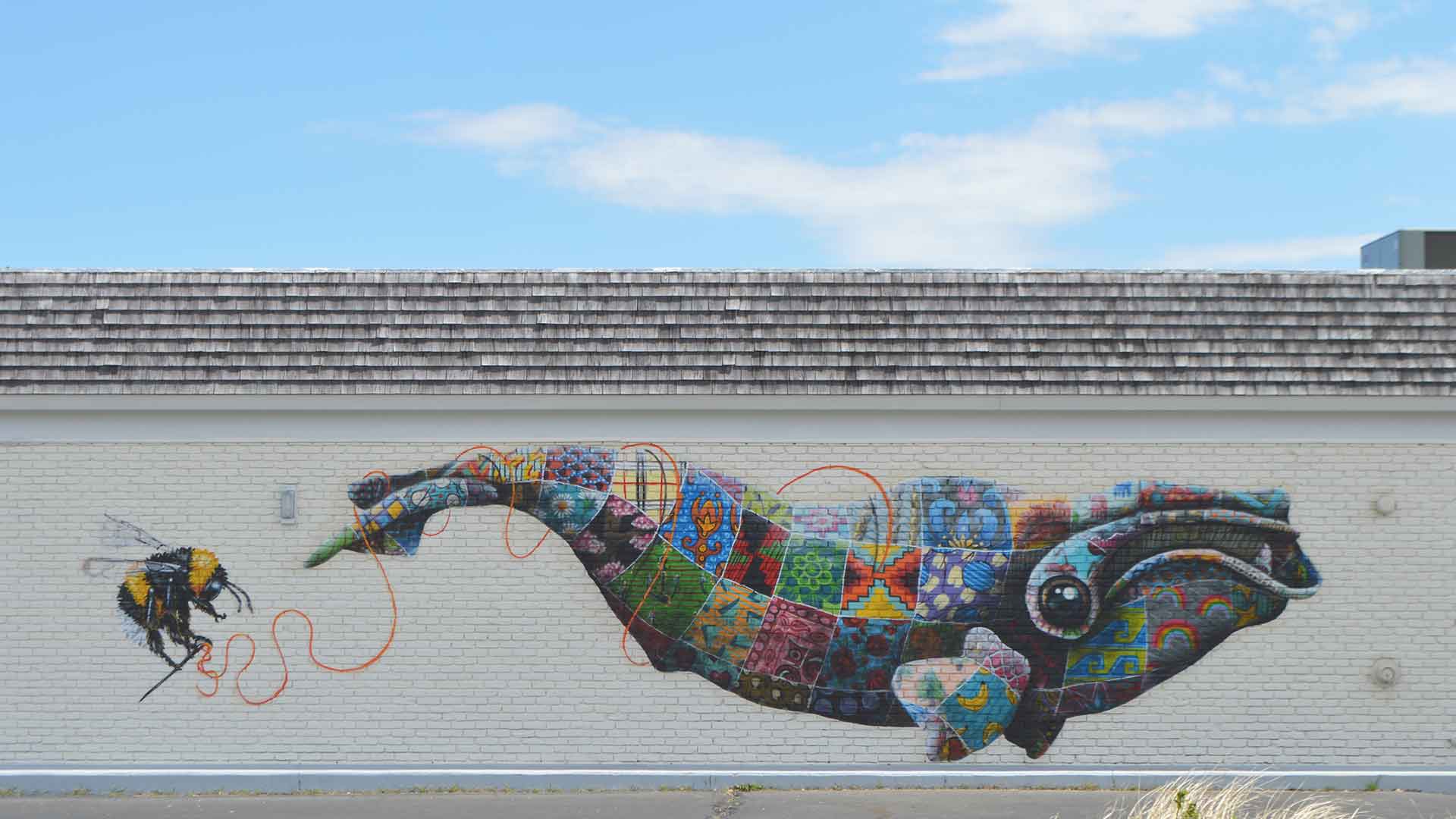 A Right whale mural in cape cod Massachusetts, in alignment with the Right Whale Research Association. 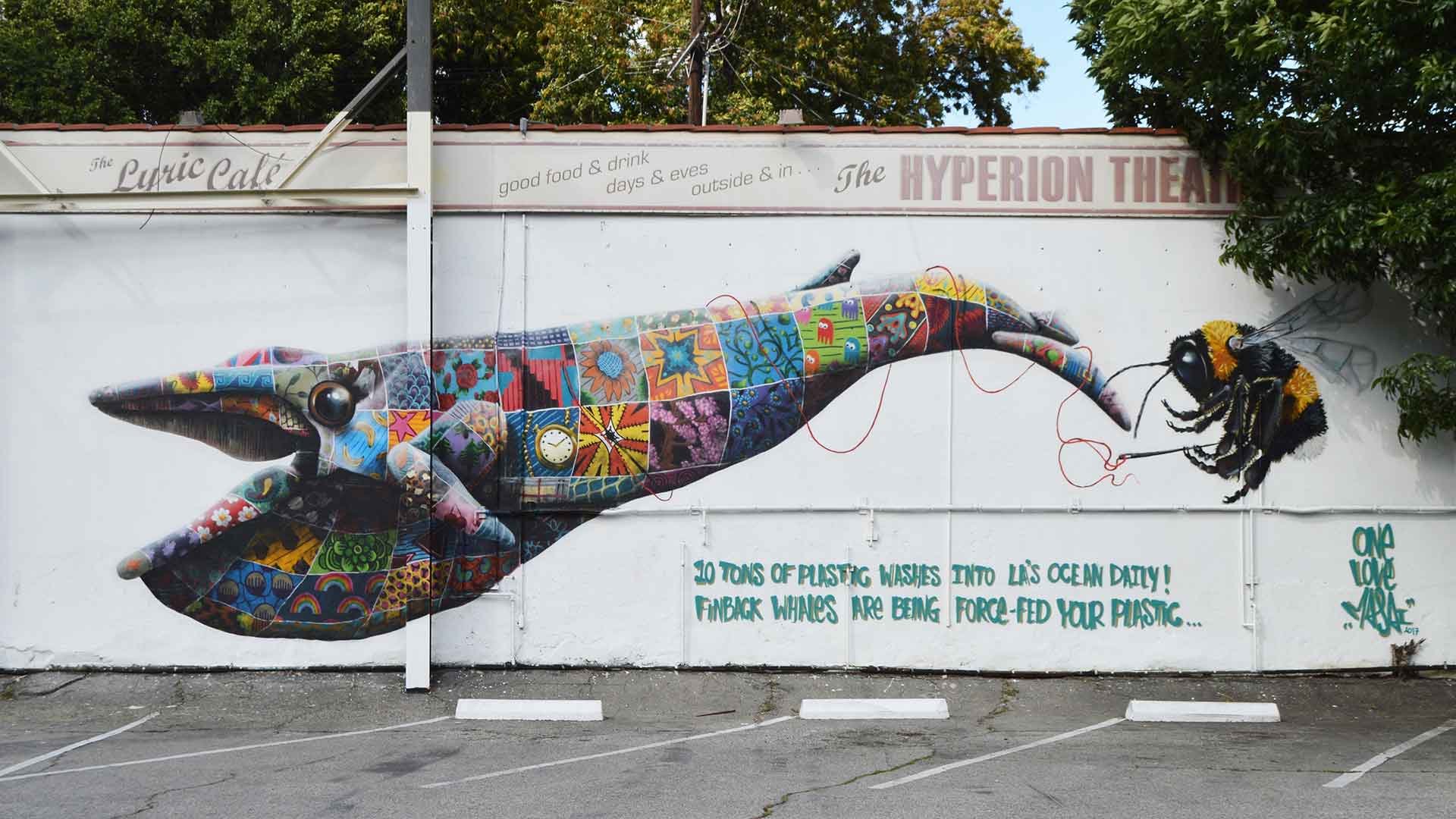 A Finback whale in Silver Lake L.A on the wall of the Lyric Hyperion theatre 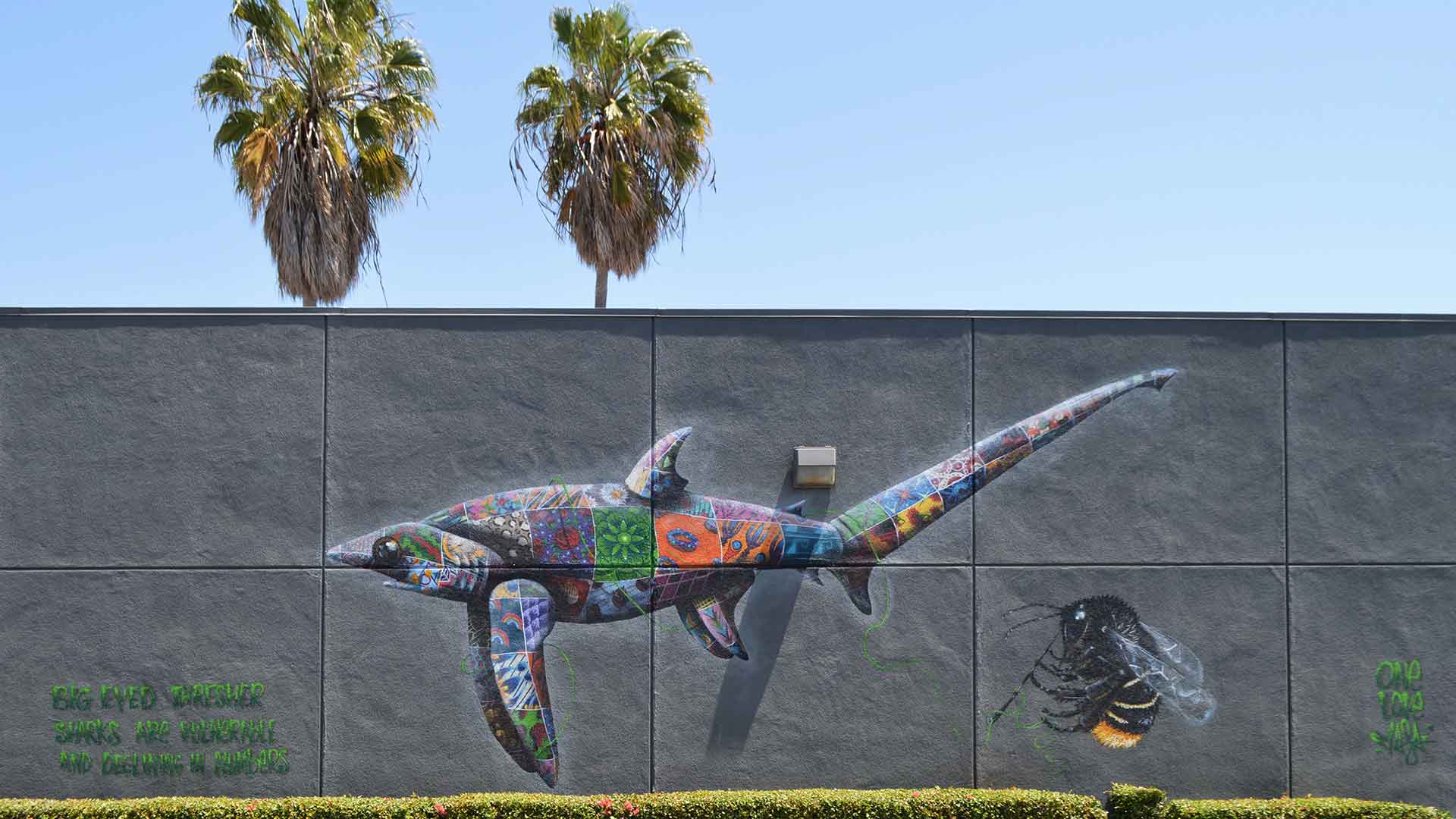 And a Big-eyed Thresher shark in Santa Monica L.A

All three of these species are on the IUCN endangered red list and regular visitors to America’s oceans. The first mural, the North Atlantic Right whale, is a baleen whale. They are critically endangered, with only a few over 500 left. Baleen whales feed on Zooplankton and Krill, they take large gulps of water and then filter out their tiny prey using baleen plates. During feeding season, usually from spring to fall, Right whales may eat more than 2,600 pounds of Zooplankton per day, and of course today that also includes a huge amount of plastics.

Whenever I paint in the public domain, I am regularly reminded as to how well the audience reacts to artwork as a catalyst to spread a message. In Cape Cod I was working with scientists, biologists and dedicated species protectors; all of which are of course the ones in the knowledge. However, its immensely rewarding to witness them getting excited at the prospect of a mural interacting with a previously unaware audience. Cape Cod most definitely has its fair share of unaware visitors every summer. In fact, tourists on the popular whale watching boats could be amongst the last to ever see these gentle giants. Perhaps the mural will encourage some people to reduce their plastic consumption.

My second whale, the Finback, is a visitor to the waters of L.A; they are also a baleen whale, suffering the same punishment of plastics in the ocean. I read in an EcoWatch article, written by Nicole D’Alessandro, that a ridiculous 10 metric tones of plastic enter the L.A Ocean per day. For comparison, a double-decker London bus weighs in at 11 tones. As a result to this painting a challenge was set to the owner of the wall, the ‘Lyric Hyperion’. I’m excited to announce that they are now on a route towards eliminating the use of plastics in their service.

My third painting for this trip was of a Big-eyed Thresher shark, another ocean species that is suffering an apparent decline in population in Californian waters. In addition to a vulnerable life-history characteristic, these sharks are suffering from a continued fishing pressure from pelagic fleets, which has the species listed as vulnerable.

I also opened my first ever, international solo show – titled ‘Sixth Extinction’ at the C.A.V.E gallery in Venice LA. This show, is an extension to the murals that I painted whilst on my 9 week ‘Art Of Beeing’ tour across the USA last year. 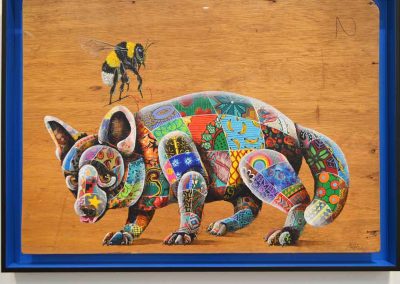 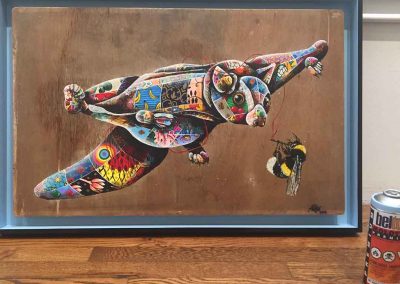 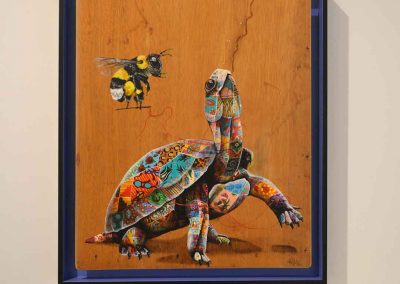 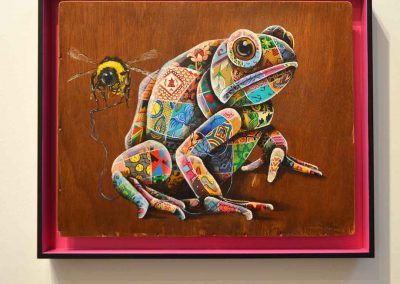 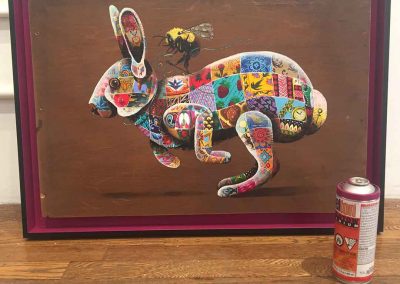 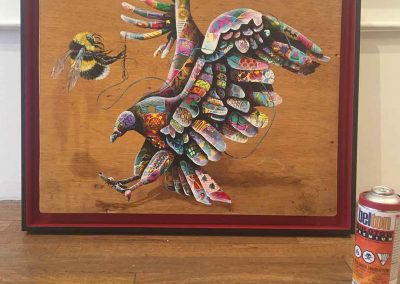 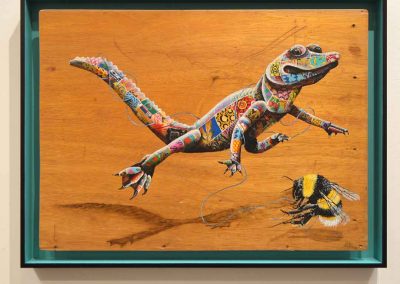 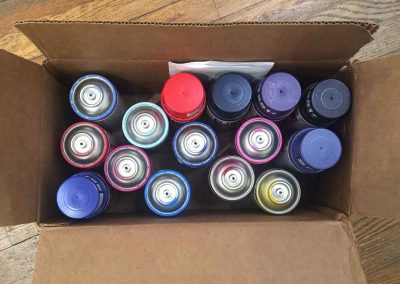 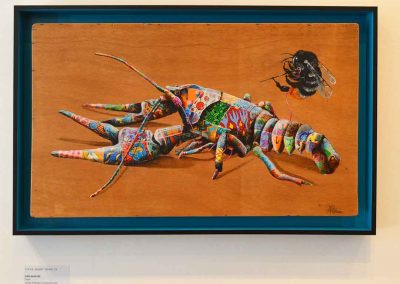 I spent three months busy in the studio, creating 17 paintings that arrived via courier, minus the frames, which were waiting for me in L.A. I then hand finished the frames with spray paint on the inside of the box frames. The wooden canvas paintings sit, floating inside the box allowing for the complimentary colour on the inside to co-exist seamlessly. So as to perfectly match the colours that I wanted on the inside of the frames, I pre-ordered some Belton spray paint with Bombing Science. Bombing Science offer a super reliable and fast courier service of all graffiti related materials across the States, and they are very reasonably priced.