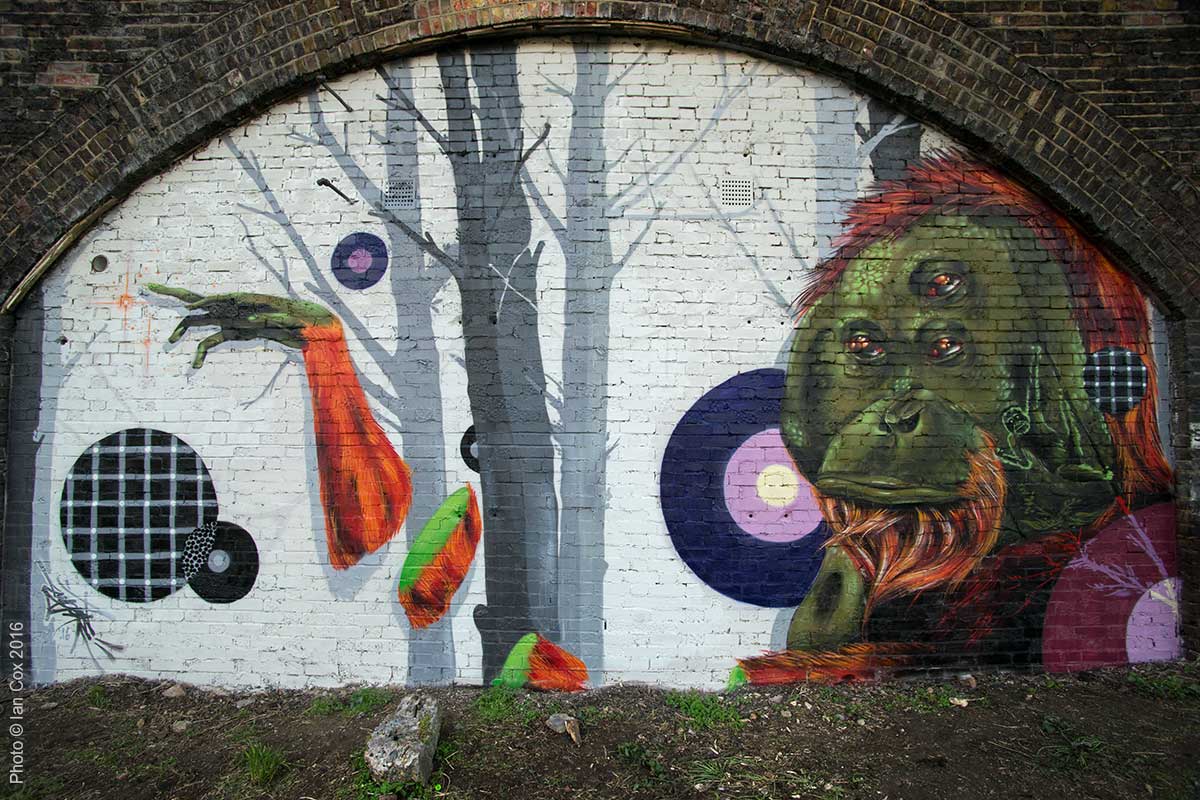 The Sumatran orangutan almost exclusively lives in trees. Females virtually never travel on the ground and adult males do so only rarely. This species is seriously threatened by logging (both legal and illegal), conversion of forest to agricultural land and oil palm plantations, and fragmentation by roads. Animals are also illegally hunted and captured for the international pet trade.

Support The Rainforest Alliance in their work to protect vital forest habitats in the Ulu Masen area of Sumatra.

Interview with Fiya One

You have been heavily involved in graffiti in South Africa, tell us a bit about the scene over there.

It has come a long way in a short time. Just 15 years ago In my home town Durban I remember experimenting with different caps acquired for all sorts of different aerosols, and all we had was mostly local hardware brand paints and some secret spots to get Rusto and Motip brands. Graffiti was very different culture then and was way less accessible, thinking about how it is now I would never have thought at the time it would reach this point. It was definitely not something you would be bragging about on your MySpace page, if you where even privileged enough to have one. That being said I am glad to have seen it grow to where it is and am glad it has still managed to stay as free. I think that it’s sad the way graffiti has been contained like it has in the UK. I would say that there is a lot happening for graffiti in South Africa right now and things are moving fast right now on all fronts. I have been spending most of my time in Johannesburg and can safely say that we are painting so much the shelves are often empty. Haha you best believe the QUEST BOYS have their racks loaded. If you are in Durban, Cape Town or Johannesburg you will find what you are looking for.

Graffiti is not your only creative outlet though, I know that you are an awesome photographer too. How did you get started with cameras?

At first I would always have to have a camera on me to take photos of stuff I was doing in my day job and then of course my Graff, I guess it just happened naturally. I always had the “kakest” little point and shoot cam. One day I came into a bit of money and decided to invest in a SLR and then I guess the rest is history.

You’re living in the UK now, what are your plans, are you going to use it as a way to approach a new audience and showcase some new styles?

Yeah I will be dotting around and making “indota moves” in your areas soon enough, haha. Probably going back home but will definitely be back. I guess I will just be doing what I usually do and hopefully the audience likes what they see. I am currently situated in a place with minimal audience though (lol), so after a couple of power moves things should heat up again.

From the people I have met and been around it seems that a lot of people are recycling! It’s great because it really makes a vast impact on the environment and stops everything smelling like ass. This place is however so much smaller then SA, and I can see how things could get out of control of people weren’t careful. There are massive differences in our lands as far as a completely different climate, size and landscape when South Africa is compared to the UK. The vast numbers of species on and off land we have is one of the best and most diverse in the world. I wouldn’t really know where to start with advice but I guess it can’t hurt to try live a “greener” lifestyle. The UK Seems to be plagued by convenience in a way and it might be easy to slip into an unconscious or consumer lifestyle. This is quite a big discussion I think and we should all just try respect the earth more. Humans are really making a mess of it otherwise.