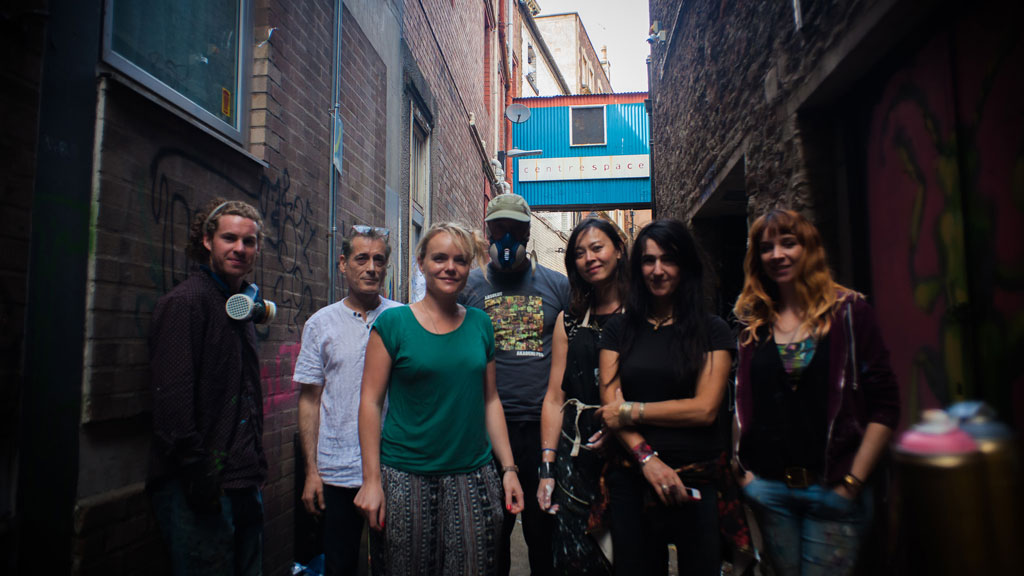 Some of the UK’s top environmental street artists have started work revitalising one of Bristol’s city centre streets in an attempt to create Europe’s biggest environmental art street.

United by a desire for a more sustainable future, ATM, Jonesy, Justyna Budzyn, Karen Francesca, Jane Laurie, Ollie Gillard (Gage), Ben Wilson and others have come together as ‘Human Nature’ artists to both transform one of Bristol’s most neglected streets and increase awareness of environmental issues. ‘Our Enchanted Garden: Darwin’s Wonderland’ joins painters, mosaic artists and sculptors all considering our changing relationship with the environment. Celebrating his love of nature and 180 years since Darwin first sailed to the Galapagos Islands, each artist’s work is in response to this central theme.

Leonard Lane, home to Centrespace Gallery and studios, has until now been known as a back alley popular with taggers. But, as I walked down it six months ago I felt compelled to start to turn it’s fate. Human Nature was coming to town on tour, and if there’s one thing 18 artists can do – it’s change an area. We’ve already been out in force in Leeds, and helped bring a giant honey bee to Bristol – pah, what’s a lane?!

So, here we are in Europe’s Green Capital City and the home of street art hoping to start to change not just the atmosphere, but this lane’s role in the city. We’re asking some tough questions about where we are today but also hope to bring art that reflects what we want to see in the world. Leonard Lane has always been a space for expression of one form or other, we’re just doing things a little differently…

It’s day five, and we now have around 20 pieces of work.

From painted chewing gum to the beauty of pollinating insects, endangered birds and our relationship with fossil fuels, our works encourage passers by think carefully about their own ecological impact and encourage debate in the city. Rather than rush through the street we hope they will stop, reflect and enjoy their surroundings.

Organised by Human Nature, the UK’s first dedicated environmental art platform, 18 artists from across the country will also be exhibiting at Centrespace Gallery on Leonard Lane from 17-30 July. 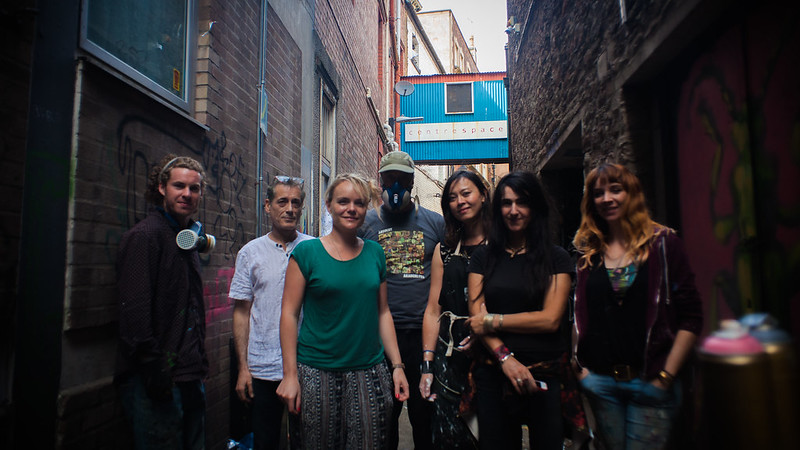 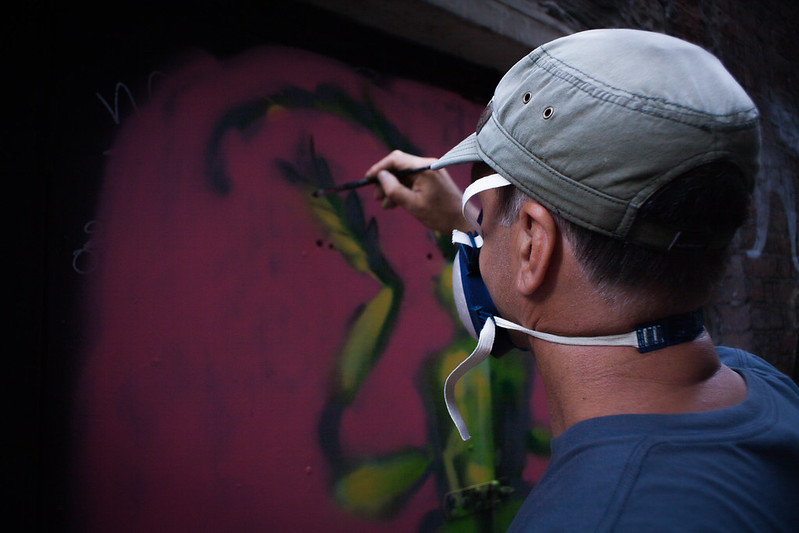 Recently named one of the UK’s most influential conservationists by BBC Wildlife Magazine, ATM has been at work on the lane reminding us of the population decline of some of Britain’s most important pollinators – moths and beetles. 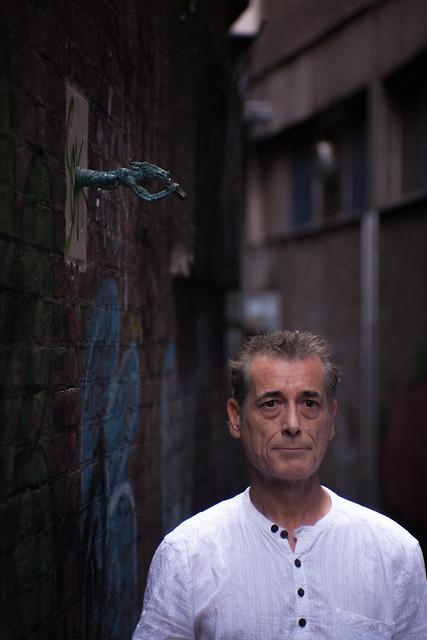 London’s secretive Jonesy has used his signature bronze casting, prints and painting to illustrate his concerns about nuclear waste, fossil fuels and plastics. 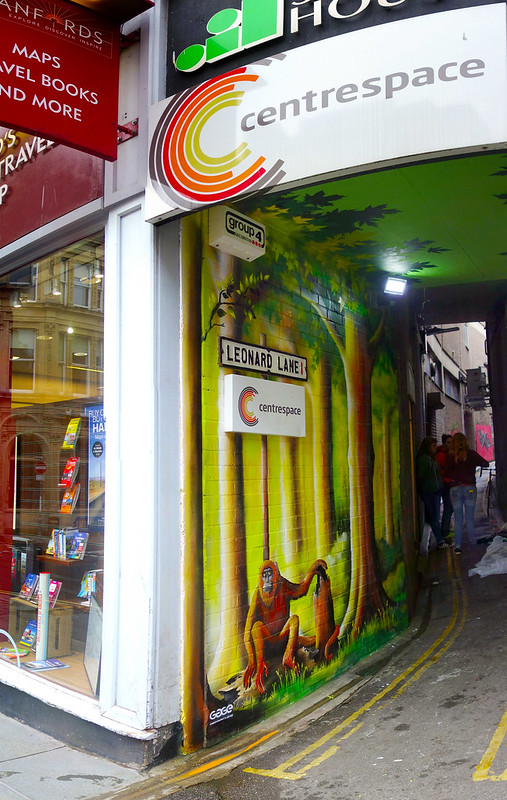 Olli Gillard, or ‘Gage’, from Bristol has been at work creating one of his highly detailed murals inspired by nature. 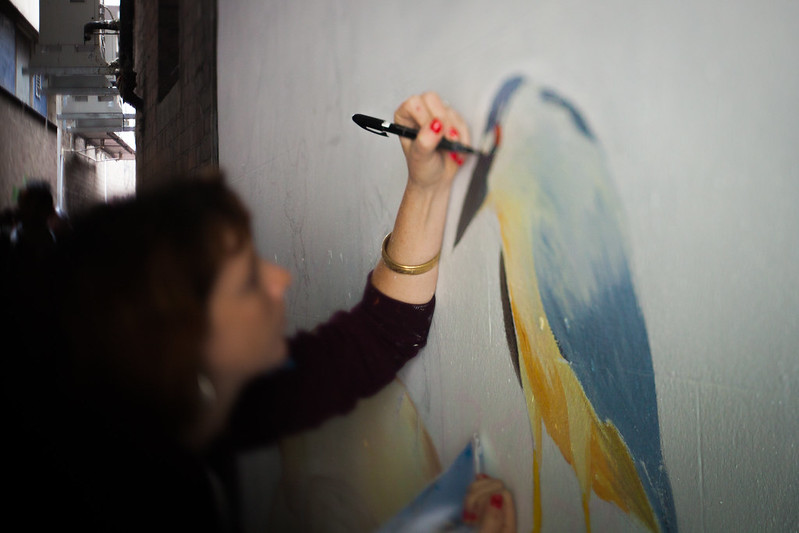 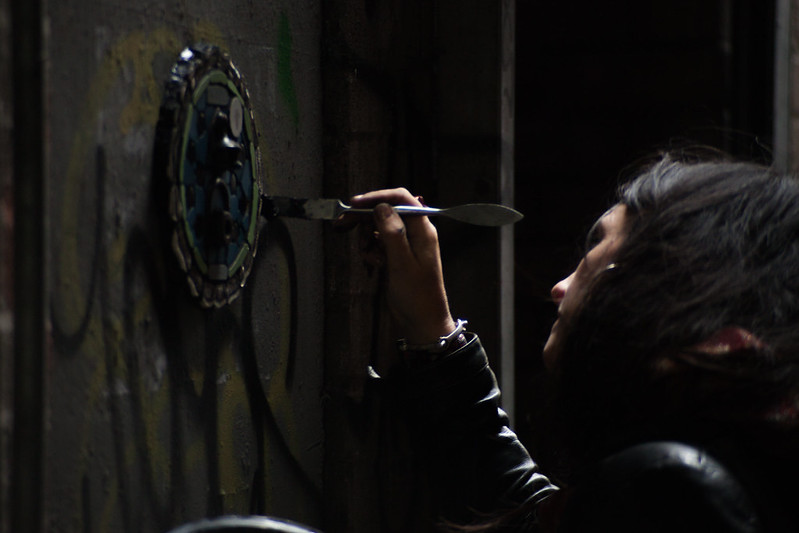 Karen Francesca from Brighton has left a trail of mosaic work along Leonard Lane, to create both a sense of wonder and urgency about our current environmental situation and focus on the role of the earth in our lives. 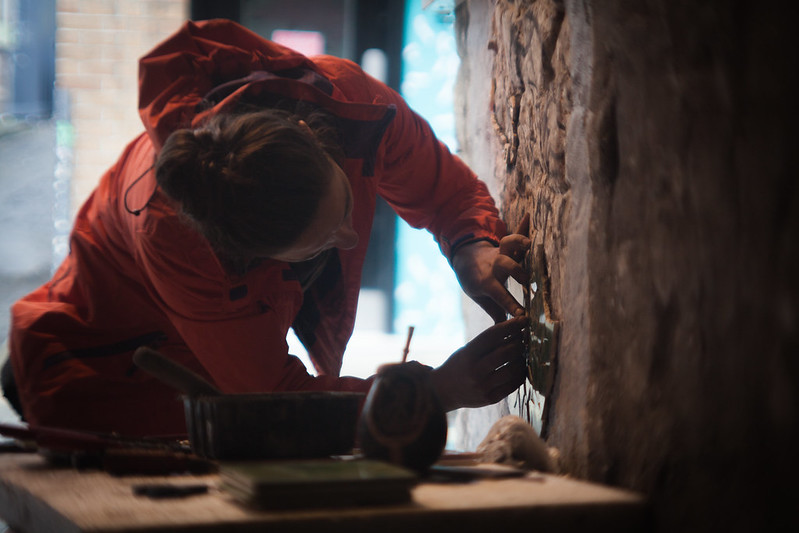 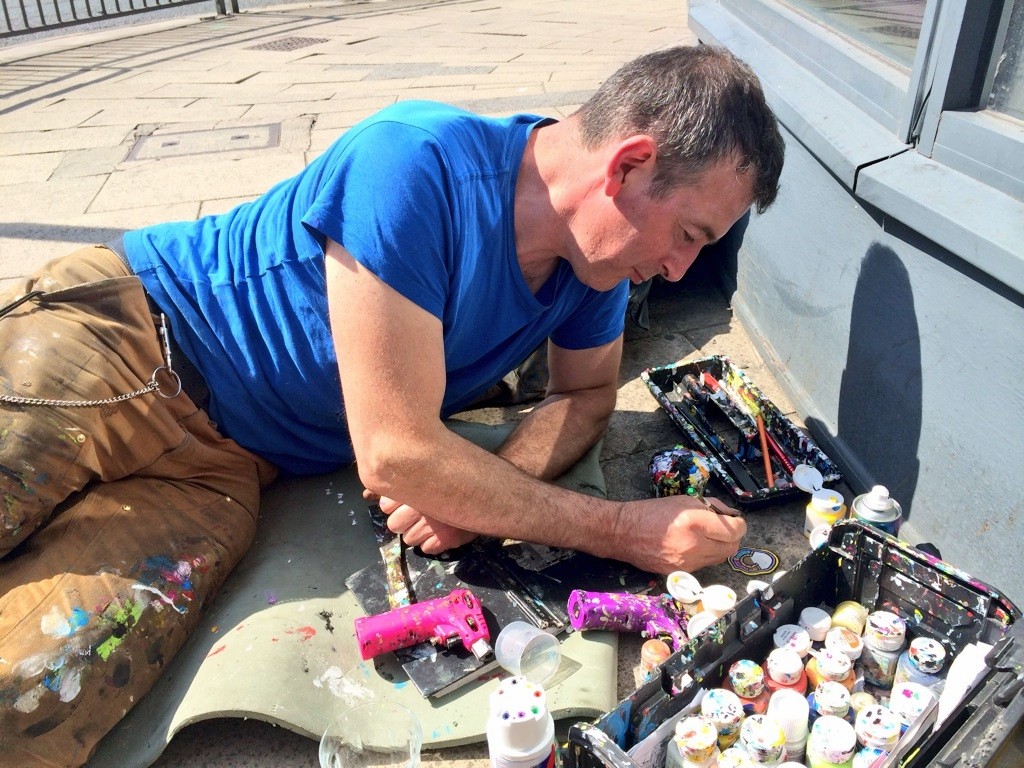 Ben Wilson will be painting on discarded chewing gum later in the week, transforming waste to wonder – creating miniature works of art on the ground. 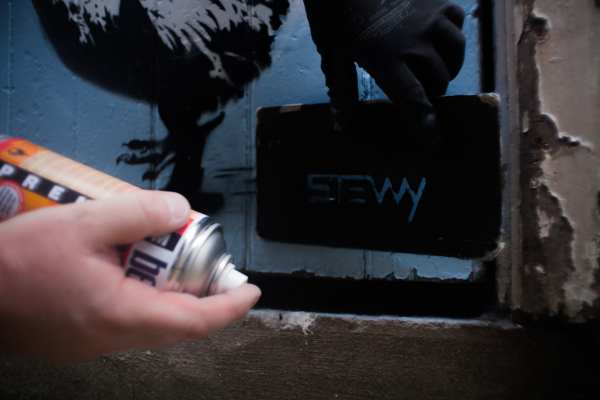 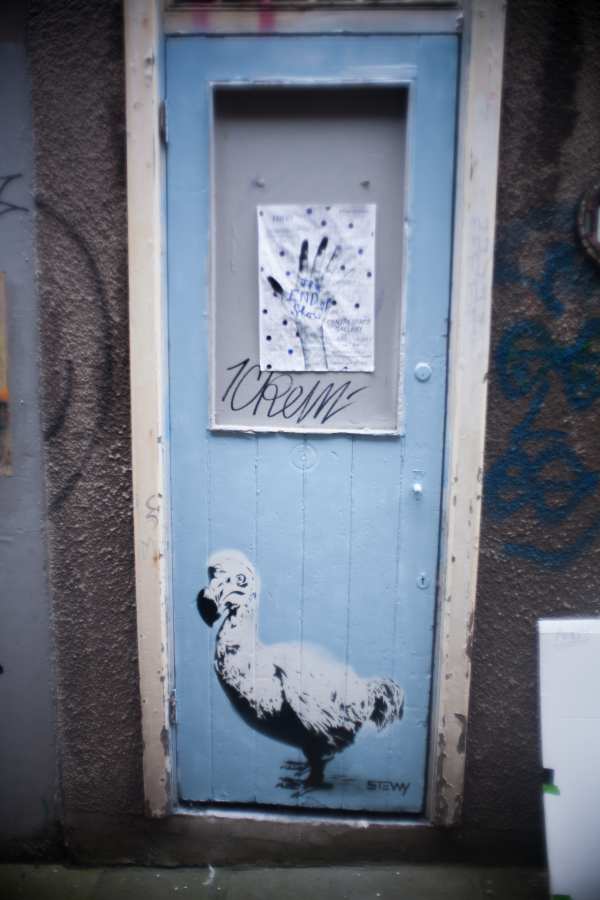 It does seem a big mountain to climb, even now, but just as we can’t sit back and watch climate change, the extinction crisis and burning of fossil fuels lead us down a path of destruction, we want to create a microcosm of what can be here. Transforming a negative space into something more positive for future generations. At the core of our work is, ultimately, vision and hope.

We’re realistic in understanding that total change won’t happen over night. But who knows what Leonard Lane will evolve into now we’ve slightly altered its course? Over the past few days we’ve been seeing other local artists joining in, bringing their own touch to the lane. Our hope is this will continue for some time to come… 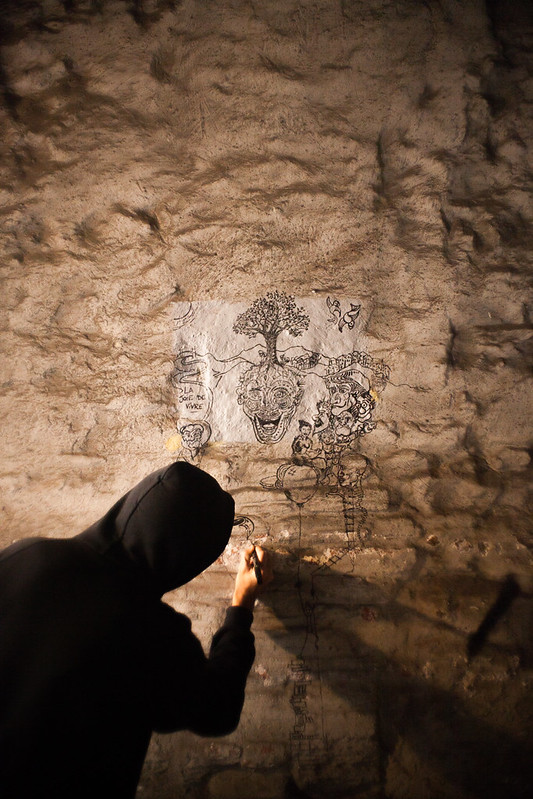