Secret street artist Jonesy is best known for his miniature works in bronze. His sculptures are often placed high up on the top of street signs or on walls. But these are just one outcome of his many talents.

He sculpts, paints, prints and makes musical instruments. The latter made from sustainable fruit trees and recycled wood.  Jonesy’s main interests are environmental issues, science and nature, and the survival of man as a species. Since leaving art college in 1986, the main focus of his work has been related to mans’ relationship with the natural world.

I attempt to promote intelligent ecology over bad husbandry. Almost everything we do is bad for the planet and we must immediately address the worst of what we are doing if we are to survive.

The use of fossil fuels, and in particular sand tar oil, fracking for methane, and the issues surrounding nuclear waste, have been the main focus of my work, along with trying to promote more environmentally friendly forms of energy.  I create sculpture, painting, prints, street art, and musical instruments to communicate this.

Many of my sculptures challenge our behavior, such as ‘Icarus’ who of course flew too close to the sun. In Greek mythology Icarus attempted to escape Crete using wings made of feathers and wax by his father the master craftsman Daedalus. But his extreme self-confidence resulted in his ultimate end.  Has such over confidence permeated modern day society and, if so, can we do anything to address it?

I’m interested in musical instruments because music and art are two ways in which an individual can have a voice in society. Artists can have a voice in a world of multi-national corporations, government control and advertising. I feel counter-balance messages are an urgent necessity.

I was brought up in the 60’s where music changed the world and really I would like art to do the same thing. 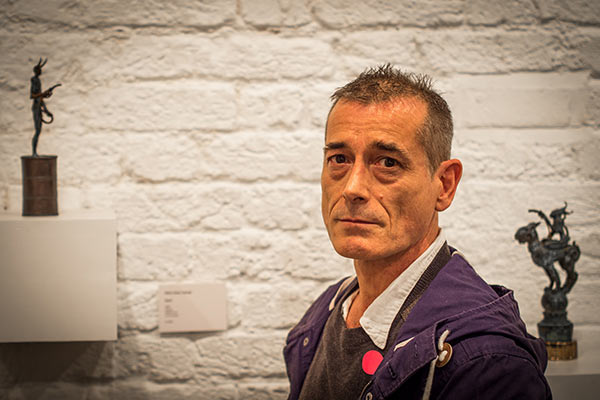